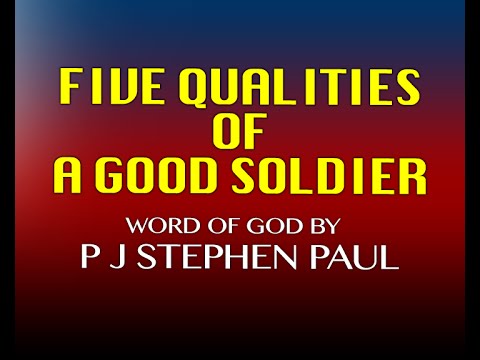 FIVE QUALITIES OF A GOOD SOLDIER

Intro: This weekend, we celebrate Memorial Day. A day first observed on May 30, 1868 to honor those who died in the Civil War. Now, on Memorial Day, we honor the memories of all those who have died in the military in the service of the United States of America. We would all do well to remember those who gave the ultimate sacrifice to ensure our freedom this morning. There have been hundreds of thousands of great soldiers in this countries history. While we honor the war dead throughout America’s history this morning, another great Soldier comes to my mind.

Later, in this service, we will commemorate another memorial service. We will celebrate the Lord’s Supper and call to mind the death, resurrection and the return of the Lord Jesus Christ. Jesus was a good soldier! Even while we honor our war dead and our resurrected Warrior, there is another great group of soldiers that leaps into my mind today.

I am reminded of those in the Christ’s Army who have died on the battlefields of faith and of the legacy they left behind. I am referring to people like those mentioned in Hebrews 11. Great men and women of God who were good soldiers of the cross and who died on the battlefield to preserve our precious faith. I want to honor them as well. As we think of these people who have sacrificed so much for us, I want to remind you of a very awesome truth.

One day, our lives will all be over! One day every person in this room will be just a memory to those living on this planet. When it comes time for you to leave this world, what kind of legacy will you leave behind? When people remember the kind of person you were, will they remember you as a soldier of the cross? The time to think about these things is now. After you are gone, it will be forever too late! As Paul neared the end of his life, he languished in a Roman prison. But, from that cell, the great Apostle took steps to ensure that he would be remembered as a good solider of the cross. He took the time to write to young Timothy and give him the secret for becoming a good soldier. It is that thought that I would like to consider this morning as we think together about the 5 Qualities Of A Good Soldier. Perhaps this will encourage and challenge each of us to become the best soldiers that we can be for the glory of the Lord.

A. Implies Relationship (The first step is to join the army) No one can be a soldier for the Lord until they first get into the army. This is accomplished only through receiving Jesus as one’s Savior, John 3:3; Eph. 2:8-9; Acts 16:31.

B. Implies Rank(There is always someone higher than you.) The same is true in the Lord’s army. Every child of God is under ranked under Jesus and is responsible for following Him and His will for their lives, 1 Cor. 6:19-20. (Ill, God always has a way of cutting down to size – Ill. Gideon, Judges 7:1-9 – From a General to a Sargent to a Private!)

C. Implies Rule (To refuse to follow orders is treason!) When we are in the Lord’s Army, we have the obligation of obeying His orders even unto the death! Notice the call of Christ that has not changed, Matt. 16:24. When we refuse to live as the Lord desires, then we have crossed the line from follower to traitor – James 4:17.

A. 2:3 His Patience – Endures hardship and does not quit. The good soldier realizes that there will be troubles along the way and is not detoured by them. He understands that pain is often part of the Christian experience, John 16:33. (Ill. Please remember that the Christian is called upon to face life with extreme patience – Heb. 12:1. (In the NT the characteristic of a man who is not swerved from his deliberate purpose and his loyalty to faith and piety by even the greatest trials and sufferings.)

B. 2:4 His Priorities – Seeks to please the Commander. Notice that the

good soldier has no higher goal in life than pleasing His Superior. The good soldier knows that anything which interferes with his performance in the military must be done away with. The good soldier wants to please his Superior and does whatever he has to do to get that job done! (Ill. Who comes first in your life? Whatever or whoever it is, that is your god! Pleasing Jesus ought to be the first priority of every child of God – 1 Cor. 10:31; 1 Cor. 6:20.)

C. 4:7b His Practice – Guards the truths of the faith. The good soldier takes care of the things delivered unto him. He is determined to do a good job, and he refuses to do anything to bring disgrace and dishonor upon his Superior. (Ill. So it is with the Christian soldier. He wants to live his life in a manner that brings honor to the Lord and not dishonor. Are you keeping the faith this morning? Ill. Phil. 1:27; Col. 1:10; 1 Thes. 2:11-12.)

III. HE IS FAMILIAR (Ill. There are some things that the good soldier knows. He is familiar with:

A. With The Sound Of The Commanders’s Voice – (Ill. John 10:3-5) The way to get more familiar with the Lord’s voice is to spend more time listening to it. You do this by getting in the Word. Do you know Him when He speaks?

B. With The Skill Of Using His Weapons – (Ill. Eph. 6:10-18) The good soldier knows that he is engaged in mortal warfare and he knows that the only way to succeed in the fight is to be proficient in the use of spiritual weaponry. You and I would do well to learn the art of spiritual warfare if we intend to succeed for the glory of the Lord.

C. With The Strategy Of The Enemy – (Ill. 2 Cor. 11:14; 1 Pet. 5:8) The good soldier knows that the enemy is ever active and never rests. The good soldier knows that the enemy is shrewd and ever attacking, but he also knows the Lord is there to help him, Heb. 13:5. He knows that regardless of the trap, God will make a way of escape for him, 1 Cor. 10:13. The good soldier studies the methods of his enemy and learn his weaknesses and these exploits to the fullest extent of his ability. The good Christian soldier needs to be wise to the ways of the devil and he needs to know that the Lord Jesus is greater than any enemy we will ever face, 1 John 4:4.)

D. With The Shadows Of His Friends – (Heb. 11:25) The good soldier not only cares about his own welfare, but he also looks out for the welfare of his fellow soldiers, Gal. 6:2. He learns about them by being around them. There is a need for the soldiers of the Lord to train together.

III. He Is Familiar

IV. 4:7 HE IS A FIGHTER (Paul makes 3 statements in this verse that describe the good soldier. Notice:

A. He Is Determined – The good soldier does not retreat in the face of the enemy, he does not run from a fight. Instead, he stands his ground and fights the battle until the battle is over! (Ill. Many Christian soldiers have dropped out of the battle! I challenge you not be among that number! Ill. 1 Tim. 1:19-20)

B. He Is Driven – The good soldier realizes that the battle does not run according to his time frame. He knows that another is in charge of the duration of the battle, but the good soldier is driven to finish. The good soldier is in the battle to the finish. Are you? What would it take to make you quit this morning? Many Christians are about one disaster and one service away from quitting on the Lord. Does that describe you? I challenge you to keep serving and keep fighting!

C. He Is Dedicated – The good soldier dedicates himself to keeping his oath. He is determined to live for the Lord regardless of the personal cost. The good soldier keeps the faith, do you? He keeps it by living it, sharing it and defending it all the time. The faith is precious to the good soldier and he does everything in his power to keep it pure and undefiled.

III. He Is Familiar

IV. He Is A Fighter

A. He Has Resolve -The good soldier is in it for the long haul. He does not quit at the first hint of trouble. He is a finisher. God give us Christians with the attitude of finishers. We need some who will stay by the stuff in these days!

C. He Has His Reward – The good soldier finishes his course because he knows that at the end of the war, every deed will be rewarded by the Commander in chief. For those who stay in the battle, there will come a glad day of blessing. They will here the Lord say, “Well done thou good and faithful servant…”, Matt. 25:21, 23. What will be waiting you when you meet Jesus?

Conc: Would you classify yourself as a good soldier of the Lord? If you are like me, you probably recognize areas where you could be a better soldier. If so, then I challenge you to come to the Lord right now and let Him make things as they should be. If you have never joined the army of the Lord, then today would be a good time to make that a reality. When you pass from the scene, will it be said that you were a good soldier of the Lord? It can be! But, that is up to you!