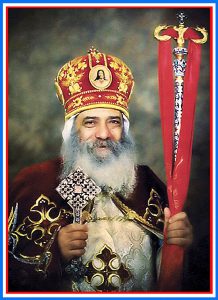 His Holiness Pope Shenouda III of Alexandria was the 117th Pope of Alexandria and the Patriarch of the Holy Apostolic See of Saint Mark the Evangelist.

A graduate of Cairo University and the Coptic Orthodox Seminary, Nazeer Gayed became a monk under the name Fr. Antonios the Syrian after joining the Syrian Monastery of the Ever-Virgin Mary the Theotokos, where he was later elevated to the priesthood.

Pope Cyril VI summoned Fr. Antonios to the patriarchate where he ordained him Bishop of Christian Education and Dean of the Coptic Orthodox Theological University, whereupon he assumed the name Shenouda, after St. Shenouda the Archimandrite and two Previous Popes Shenouda I (859- 880) and Shenouda II (1047 – 1077).

He served as Pope of Alexandria from 14 November 1971 until his departure on 17 March 2012, presiding over a worldwide expansion of the Coptic Orthodox Church. During his papacy, His Holiness Pope Shenouda III has appointed the first-ever Bishops to preside over the U.K.,  North America, Australia mainland Europe and South America.

He is known for his commitment to Christian unity and has, since the 1970s, advocated inter-denominational Christian dialogue.

Born on August 3, 1923 in Asyut, Upper Egypt, he is the youngest of a family of eight children. By the age of 16, Pope Shenouda was active in the Coptic Sunday School movement.

Mr. Gayed was very active in his church and served as a Sunday School teacher, first at Saint Anthony’s Church in Shoubra and then at Saint Mary’s Church in Mahmasha.

After graduating from Cairo University with a degree in history, he worked as a high school English and Social Studies teacher in Cairo by day, and attended classes at the Coptic Theological Seminary by night. Upon graduation from the seminary in 1949, he was chosen to teach New Testament Studies.

On July 18, 1954, Mr. Gayed was led to the monastic life at the Syrian Monastery in Scetes; he was given the name of Father Antonios el-Syriani (Anthony the Syrian, or Anthony of the Syrian Monastery). For six years, from 1956 to 1962, he lived a life of solitude in a cave about seven miles away from the monastery, dedicating all his time to meditation, prayer, and asceticism. Fr. Antonios el-Syriani was among the candidates nominated for the papal throne in 1956, but Pope Cyril VI was the one ultimately chosen for the post.

Later, at the Syrian Monastery, he became a monastic priest under the name of Fr. Antonios el-Syriani. He lived as a hermit.

ORDINATION AS A BISHOP

On 30 September 1962, Pope Cyril VI appointed Fr. Antonios the Syrian to the bishopric of Christian Education and as Dean of the Coptic Orthodox Theological Seminary, whereupon he called him Shenouda. The relevance of the name emanates from the fact that the most renowned scholar and writer in Coptic was Saint Shenouda the Archimandrite. Under Bishop Shenouda’s leadership, the number of students at the Coptic Orthodox Theological Seminary tripled.

ENTHRONING AS POPE OF ALEXANDRIA

He was enthroned as Pope Shenouda III, the 117th Pope of Alexandria and Patriarch of the See of St. Mark on November 14, 1971 , nearly 9 months after the departure of Pope Cyril VI of Alexandria. As he was a Bishop already he could not assume any different name from Shenouda.

The ceremony was the first and yet the only enthroning of a Coptic Pope to take place in the new Saint Mark’s Coptic Orthodox Cathedral in Cairo.

SUPERVISED GROWTH OF THE CHURCH WORLDWIDE

The papacy of H.H. Pope Shenouda III is marked by a worldwide expansion of the Coptic Orthodox Church of Alexandria.

In 1989, H.H. Pope Shenouda III ordained the first Bishop to serve in the land of immigration, His Grace Bishop Missael, whom was sent to the United Kingdom. Two years on, H.H. Pope Shenouda established the first diocese for the Coptic Orthodox Patriarchate in the lands of immigration, the Diocese of Birmingham (Diocese of the Midlands) and consecreated H.G. Bishop Missael as its bishop. Under the guidance of H.H. Pope Shenouda III, the British Orthodox Church, became canonically part of the Coptic Orthodox Patriarchate in 1994. At the feast of the Pentecost that same year, Pope Shenouda ordained Metropolitan Seraphim of Glastonbury as Metropolitan for the British Orthodox Church. Furthermore, His Holiness established more churches and dioceses in, and ordained bishops and priests for North America, South America, Africa, mainland Europe, Asia and Australia; this transformed the Coptic Orthodox Church from being a native Egyptian Church into a global one.

In 1973, Pope Shenouda III became the first Coptic Orthodox Pope of Alexandria to meet the Pope of Rome in over 1500 years. In this visit, Popes Shenouda III and Pope Paul VI signed a common declaration on the issue of Christology and agreed to further discussions on Christian unity. There have also been dialogues with various Protestant churches worldwide.

Pope Shenouda III is well known for his deep commitment to Christian unity. In an address he gave at an ecumenical forum during the International Week of Prayer in 1974, he declared, “The whole Christian world is anxious to see the church unite. Christian people, being fed up with divisions, are pushing their church leaders to do something about church unity and I am sure that the Holy Spirit is inspiring us.”

Pope Shenouda III has emphasised Christian Unity in his work, believing it to be founded upon a unity of faith and not of jurisdiction. As a result, he has paid many visits to the various sister Orthodox churches and their patriarchs, such as those of Constantinople, Moscow, Romania, and Antioch, with the goal of a full communion of these churches with the Oriental Orthodox Churches.

He also won, in the year 2000, the UNESCO Madanjeet Singh prize for the Promotion of Tolerance and Non-Violence by UNESCO Director-General Koichiro Matsuura on the recommendation of an international jury.

On Saturday the 17th March 2012 (the 8th Baramhat 1728), His Holiness Pope Shenouda III, the 117th Pope of Alexandria and Patriarch of the See of St. Mark departed into the heavenly habitations at the age of 88.

His Holiness guided the Church with love and care for the past forty years, in a manner that touched the hearts of many within and without the Church. He is well-known for his unyielding Orthodox teaching which was provided to the masses in a simple-to-understand manner.

Sadly, His Holiness’ health had been deteriorating over the past few months. Today, the Lord gave rest to His faithful servant who touched the hearts and minds of countless people throughout the world and presided over the largest expansion of the Coptic Orthodox Church in history.

A Message from His Holiness

These words are words from His Holiness Pope Shenouda talking to his children. These are words of comfort and condolences to you all.

I am your father and teacher, all of you my children, listen to my commandments, for I ask you my beloved children, preserve and look after the faith of the Holy Trinity.

I ask my beloved children, love one another with a true love.

I ask you my beloved, do good with all humanity.

I ask my beloved children, do not let the world deceive you.

I ask you my beloved children, do not fall short or “be not eager” in the service of the Lord.

I ask you my beloved children, to pray without ceasing and tirelessly.

I ask you o my beloved children, preserve your tongues from causing any division.

I ask of you my beloved children, to preserve the Holy Baptism that was granted to you.

I ask of you my beloved children, preserve your body pure for the Lord.

I ask of you my beloved children, do not ever lamp weaken without light.

I ask of you my beloved children, preserve the commandments that God gave to you.

I ask of you my beloved children, that the fear of God be within you.

I ask of you my beloved children, to ask of Christ for my soul, that it may have comfort in front of Him, and do not count my short falls, unknowingly and unwillingly. (Then he directs his talks to the Bishops, clergy and priests)

I ask for your love and I plead to your reverence, to absolve me from everyone. And now, I am far from you and left you, and I cannot see your faces. And now I ask of you all, that you exhaust yourselves in prayers for me, remembrance in the Holy Liturgies, that my Master may accept me to Him, and forgive me.

And I ask Christ, the Great Shepherds of Shepherds, that he may elect for you a righteous shepherd according to His Will and heart, that he may shepherd you and your matters and watch for the salvation of your souls.